FilmOn viewers should know some information about the BBC i Player for comparison to the FilmOn App on various devices. 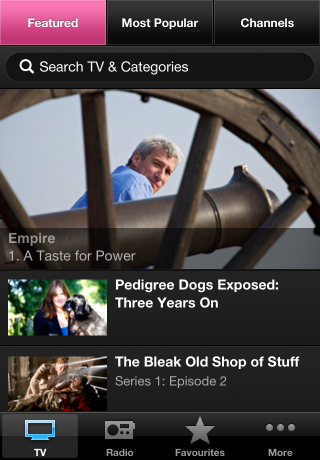 Photo of the BBC iPlayer (above)

In 2008, the BBC iPlayer was made available for Wii video game consoles.

However, the Autumn 2009 update to the Wii's Internet Channel resulted in it no longer working on updated consoles. An updated player was launched in 2009. The channel is free to download from the Wii Shop. However, the service is available to UK residents only.

Soon after the Wii release, an official BBC iPlayer application widget was provided for the PS3. However, most content remains unavailable to PS3 users due to DRM restrictions.

The BBC and Microsoft had been unable to reach a deal to add the player to the Xbox 360.

The BBC is not legally allowed to charge the UK public for access to the player, as the access charges for it are included in the licence fee already. In October 2011, it was announced that the content will be made available to all Xbox Live members in the UK.

In March 2008, a version for Apple's iOS devices such as the iPhone, iPod Touch and iPad was released. An update released in December 2011 allowed streaming over 3G.The EDGE connectivity on the iPhone, however, is not supported, as it is too slow for streaming video.

An international version of the BBC iPlayer was launched in mid 2011 in the form of an iPad application which offers a limited amount of free content, supported by pre-roll ads and sponsorship. It's core business model is subscription that costs of approximately Â£5.00 per month. The global app includes some features that are not in the UK version, including the ability to stream shows over 3G as well as Wi-Fi.

The FilmOn player is available for the Desktop, iPad, Iphone, Ipod, Android and even over the air.

FilmOn HDi player for desktops enables viewers to watch live TV streams wherever an internet connection is available by using a PC or a Mac. Choose from a wide selection of UK & International channels including, news, sports, Lifestyle, movies, shopping, kids and more.

Since the television signal comes from the attached telescopic aerial, you won't need an internet connection nor a Wi-Fi hotspot to watch TV on your iPod, iPad or iPhone. FILMON.TV AIR MAX never touches your data plan.